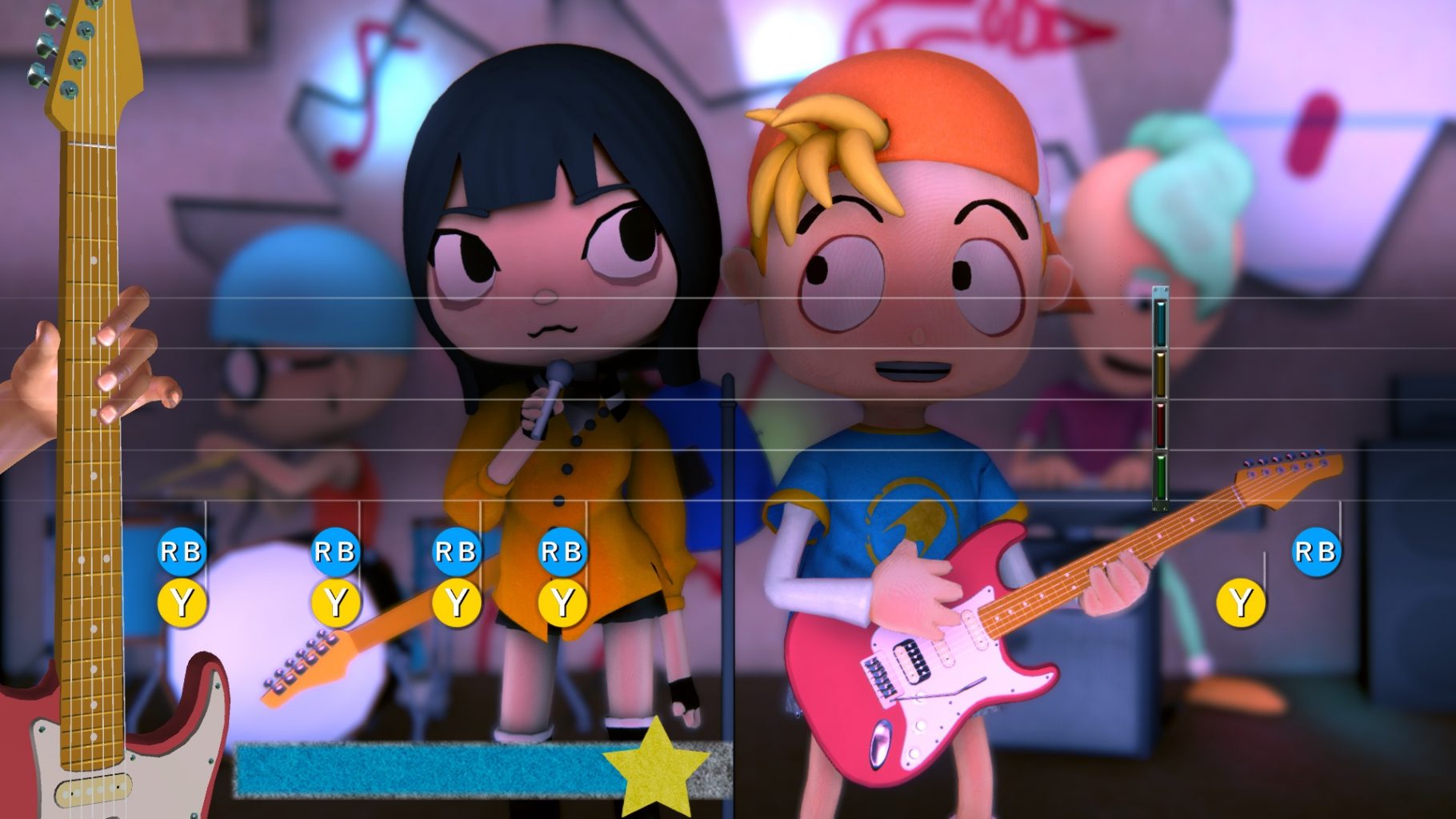 This week, we had lead developer on Starstruck, Max Ponoroff, on the blog to discuss the development of Createdelic’s debut title and what it’s like to create the world the game is set in. Max discusses how the team is trying to bring a thoughtfully crafted world to their players while keeping the game a manageable size.

My name is Max Ponoroff from Createdelic, and we’re working on Starstruck.

We just put out the trailer in December. It already seems to have gotten some attention, which has been nice.

The basic idea of the game is that you interact with the world of the game in two different ways. In one way, it’s a rhythm adventure game: you go around and play songs and that’s how you advance the story.

In the other way, it’s a puzzle action game where you go around as a gigantic hand and you mess the whole place up.

The idea of the game is that you get to see it from these two different perspectives.

There’s a team of three of us working on it, and we’re making the game this way because we like to create the world.

It feels so good to us, and it’s so nice to be able to go into the worlds that other people create.

We thought if we do things this way, we can create this world that you could see from a lot of perspectives, and we could do it with a small team.

This way, we can have more characters and tell a story you might not normally be able to do with such a small team.

Createdelic was founded about two years ago, but really, the idea of the game started way before that.

In a way, it goes back to when I was in middle school.

When I was thirteen years old, I created a map editor for the game EarthBound. People could create their own maps in the game and play through an emulator. That’s actually how I started learning programming.

Luckily that ended up being a job skill that I could use to work at a tech company.

The idea of Starstruck itself originated as an earlier project in 2012. Some of the characters and the idea that story have been preserved since that time.

I was working on it in my spare time, and back then it wasn’t actually its own game, it was actually an EarthBound fan project.

Since 2012, a lot of things have changed with the game.

Someone gave me the advice that a lot of times you’ll have to be open to changing things as much as you need to in whatever game you’re working on, because you’re going to find out that some things are not going to work.

Originally, the idea was way, way different. Some parts are the same, but now it’s a 3D rhythm adventure game with the hand. That wasn’t stuff I was thinking about before. That’s definitely something we’ve had to do: be open with changing our ideas as we move along.

Being able to sell the game as its own thing is nice too, because obviously money is nice, but also, you don’t get to make any more games if your game doesn’t sell.

We’re trying to make a game we think would be nice, but also we’re thinking about what we think people would want to play and talk about.

For Starstruck, we put out the trailer in December and I’m sure a lot of other games get a lot more attention, but we were pretty happy with what we got.

We got about a thousand likes within the first few days, and now I think the Twitter account is at around 800 followers. Hopefully that’ll grow as we go to conventions and more people learn about the game.

One thing we’re trying to do with the trailer is make a trailer that gives value to people who watch it, rather than us asking them to help us by spreading the word about our game. We want people to feel like they’re going to get something out of sharing it.

There’s new and interesting stuff going on in the trailer, and maybe if people watch it they can see for themselves.

We haven’t gotten any big streamers or anything, we’re not able to pay Ninja a million dollars.

Like a lot of indies, we’re mostly relying on organic marketing.

I don’t want to give the impression that Starstruck is an EarthBound-like game, but as I mentioned before, I’ve been a part of the EarthBound community for a long time now.

I have a lot of friends in that community so I could send them builds of the game, and they would tell me what they think. Getting that feedback and having those conversations helps a lot.

I’m trying to make something that my friends would like, and the sooner you get them playing it and seeing what they think, the better.

That’s what we’re hoping to expand on at PAX East, we have a booth, so that will be even better opportunity to start to see what people think about it. People can visit us at PAX East, we’re booth 23099.

Originally, I started out thinking about Starstruck as a 2D game.

There are so many different things you have to do in 3D: you have to start thinking about the camera angle, the camera effects you want to use, how are you going to have the characters animated. Especially with Starstruck, it uses all of that stuff a lot because there are a lot of musical moments in the game.

In my job before this I was a software engineer, I went to school for it and everything I practice is related to that, and now suddenly I’m a cut-scene director too.

It’s kind of obvious when you think about it, but that’s something unexpected I didn’t realize I would be doing. It takes up a lot of my time, but it’s also the most fun.

I enjoy setting up where the characters are going to be and what they’re going to be doing while they’re playing the song, all the stuff that’s going to be happening to them.

I think that’s a lot of fun.

I went into thinking I’m going to be a programmer, but now I’m becoming a pseudo-animator, even though I’m not the animator for the game.

I do everything except the graphics, animation, music, and sound effects. It’s been a lot of learning, I’ve learned about so many things that I like doing. I love coming up with things the characters will say, little gags and things like that.

One challenge and it’s probably something a lot of game developers share is making sure your game doesn’t get too big, because with the game like Starstruck, you could easily spend forever making this huge game that will never be finished.

Initially, the idea was way too big where it wouldn’t be possible. That’s why we started thinking about this way of doing things, where we’re trying to condense everything using the two game modes.

That’s been one challenge, and that’s where some creativity comes in.

I think I remember the quote by Shigeru Miyamoto that was something like “a good idea is something that solves two problems at once.”

That’s something that we’re constantly having to think about this game especially because we’re trying to blend game modes in a way that isn’t done a lot.

“If you just make a rhythm adventure game, I think a lot of people aren’t going to be be interested.”

At the core of it, they were different ideas that I liked, and I thought, wouldn’t it be interesting to combine them together.

I think the most important part is if you do them together it’ll be fun.

Another part is that it allows us to tell this one story in this one area from multiple perspectives, which can bring more depth to the world.

Another part of it is that if we were just trying to do a rhythm adventure game, I don’t think that would get much interest honestly. I’ve noticed with rhythm games, either you’re an established brand or you’re working with famous songs or famous things. Which, obviously, we can’t do, and it’s not something we’re interested in doing in the first place.

Even putting aside the other stuff, it was almost a necessity because if you just make a rhythm adventure game, I think a lot of people aren’t going to be be interested. I think the hook of the game is having these two modes work together.

For making it intuitive to the player. With a complicated game like this, it’s very tempting to just want to just explain everything, but I don’t think that’s what people want.

A little explaining me is okay, but for the most part, they just want to get in and play. So we have to try to make the game as intuitive as possible.

A lot of that goes back to getting people to play the game, see what they think, seeing what they picked up on immediately and what they didn’t get. A lot of that comes down to experimentation for us.

We’re creating this very interconnected and complex world, the challenge with that is that we have to think about things way in advance. We have to make it so that everything fits together like a giant puzzle.

If you think about the games you love, you may realize that it was a giant puzzle that the developers put together, it’s all planned out from the start.

In a way, we’re reusing things, but also we’re using things more so we can give more depth to things from a lot of different perspectives.

A few years ago, getting the word out about your game was totally different.

That is another challenge we’ve been facing. Not to say we’ve been struggling, but it’s definitely something we constantly have to think about.

When I first saw the Indie Boost platform, I saw that could bring a lot of benefits. We don’t have a public demo yet that we can send to people it’s definitely good to see might be interested in checking out the game. Maybe after PAX East we’ll be able to send a demo out, that’s something we’re thinking about doing.

It’s definitely good to have this kind of resource.

My favorite thing about making games is creating the world, especially when you’re doing it with good friends.

There’s a lot of focus on marketing and making money, but also, you’re creating this thing that––even if zero people buy the game––you can still share the game with your kids, maybe even your grandkids. Think about how special that would be.

Those are two things I really like about it.

I think everyone talks about sharing their game but something I don’t hear a lot of game developers talk about is, think about how cool would it be if your grandfather or your grandmother created a game and you could play it. I think about how interesting it would be.

People will be able to enjoy it for a while, you’d be able to share that with people who you’ve never met or people who are important to you.

Starstruck is on Indie Boost!

Verified content creators and press can request keys for the game or interviews with Createdelic through their game page.

You can also wishlist the game from their Steam page.

This week, we had lead developer on Starstruck, Max Ponoroff, on the blog to discuss the development of Createdelic’s

Interviews
We talk to indie game developers to see what industry veterans have to say about video game marketing.
Browse all 15 Articles